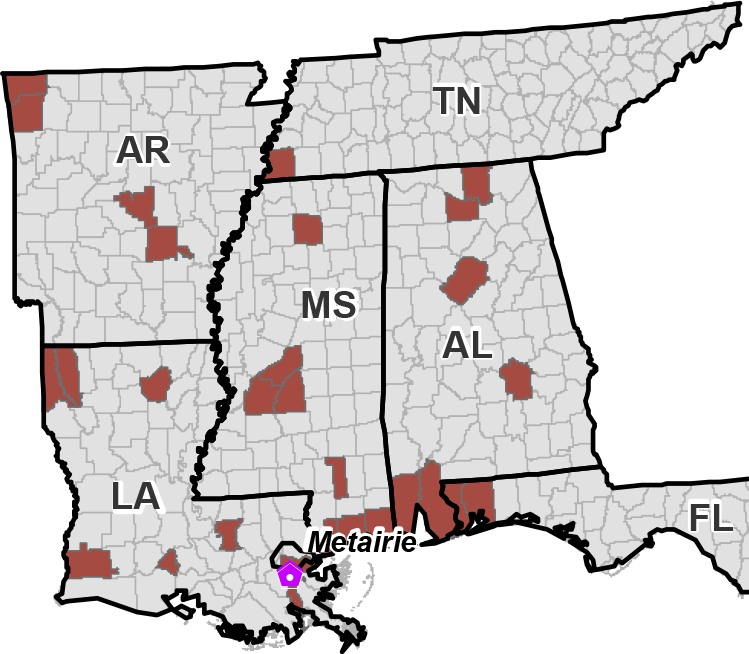 Although the 29 GC HIDTA-designated counties/parishes are interspersed across the six-state area, they share many drug threat commonalities. Regionally, the area’s highways are used by international drug trafficking organizations (DTOs) to transit drug shipments entering the country across the Southwest Border to the Eastern Seaboard and drug-related assets back to Mexico. The drug shipments flow from west-to-east and south-to-north via our interstate highway system while drug-related assets travel back to Mexico from east to west and north-to-south. According to FBI Uniform Crime Reports (UCR), the six states regularly rank among the highest in crime and violence. Unfortunately, they also share high poverty rates relative to other states. Generally, primary and secondary education systems in the six-state area are near the bottom of the list in comparison to other states with few exceptions. Drug abuse is a major problem experienced throughout the region. DTOs have taken advantage of these circumstances providing a steady supply of drugs to neighborhood-based gangs and local distributors. Oftentimes, local/neighborhood-based gangs and DTOs employ violence to maintain control of their distribution points and clientele. These factors contribute to high crime rates experienced throughout the GC-HIDTA.

DTOS, principally based in Mexico, govern the wholesale distribution and transportation of methamphetamine, heroin, as well as fentanyl and other opioids which routinely rank as the most significant drug threats across the Gulf Coast HIDTA region. Marijuana continues to grow as a threat as high potency variants are diverted from western states along with associated THC infused products such as eatable candies, cookies and vaping oil. Cocaine and crack cocaine remain readily available although have been supplanted to some extent by the volume of methamphetamine. The diversion of pharmaceutical drugs via pharmacy burglaries, home medicine cabinet diversion and Internet pharmacies remains a significant problem, as areas continue to see unabated prescription drug abuse. The category of New Psychoactive Substances (NPS) such as synthetic marijuana/spice is an ever-present problem. Gang-related drug activity and its associated violence remain major threats and have a huge impact on the crime problem in many parishes and counties, particularly in and around our urban areas.

In order to effectively address these varied and dynamic threat elements, the Gulf Coast HIDTA Executive Board has developed a strategy, which coordinates federal, state, and local drug law enforcement efforts to mitigate these targeted threat elements. The strategy is designed to attack the threat through the funding of initiatives comprised of multi-agency participants tasked to address defined threat elements within their areas of responsibility. These task forces, strategically situated across our six-state area, are required to support drug enforcement activities targeting the aforementioned threat elements most affecting the communities they service. They share intelligence and pertinent case information with federal, state and local law enforcement agencies and other HIDTAs around the country, as appropriate.

Investigations are initiated and prioritized consistent with those illicit drug activities having the greatest impact on crime and violence. Initiatives are encouraged to target the highest-level drug trafficking organizations found operating within their vicinities. This does not preclude them from investigating local DTOs provided their primary focus remains the identification, targeting, and dismantlement of major organizations.

Inasmuch as the transshipment of drugs and drug-related assets across GC HIDTA highways is a major threat to the region and other parts of the country, the GC HIDTA developed and maintains a robust Domestic Highway Enforcement (DHE) Program. Anchored by the HSI-led Blue Lightning Operations Center (BLOC) in Gulfport, MS, many enforcement initiatives have interdiction components imbedded with investigators who collaborate to expand drug and asset seizures into investigations aimed at identifying, targeting, and dismantling underlying DTOs. These initiatives are supported by a team of Intelligence Research Specialists (IRS) housed within the BLOC as well as Investigative Support Network (ISN) analytical staff, who provide intelligence support from the initial vehicle stop and throughout the investigative process.

Federal, state, and local law enforcement agencies throughout our six states share resources with the Gulf Coast HIDTA to combat drug trafficking organizations operating within our region and beyond.